I am not prone to writing recipes these days since so many already exist in one form or another, but my photo of a recent kitchen creation prompted some people to ask for one.

Since my garden has been producing an abundance of zucchini, I am trying to be more creative in their uses. To anyone that has planted zucchini or courgettes, they are prolific. The first few, I sliced lengthwise on the mandolin, seasoned with salt, pepper, and a drizzle of olive oil and grilled, I have made dill zucchini pickles, that we put on our burgers, soup, sauteed with eggs…

The possibilities are endless… which lead me to combine my love of a flaky buttery crust and caramelized zucchini. It was delicious and I will be making it again!

Ready for the oven

1 egg, beaten for a wash

In a large sauté pan, on medium-low heat, add 1-2 TBSP of olive oil. Add the sliced zucchini and a pinch of salt. Cook low and slow till all of the water has released and evaporated. It took me about 30-40 minutes until they were translucent and golden. Season with Salt and FGBP, let cool a bit.

Roll out your dough, place it on a lined baking sheet. Put the caramelized zucchinis in the middle and fold up the edges. Place thyme sprigs on top, brush the crust with an egg wash, and grate some parmesan on top.

Bake in the oven for 40-50 minutes until the crust is golden and the parmesan begins to crisp. Let cool, slice, and enjoy! 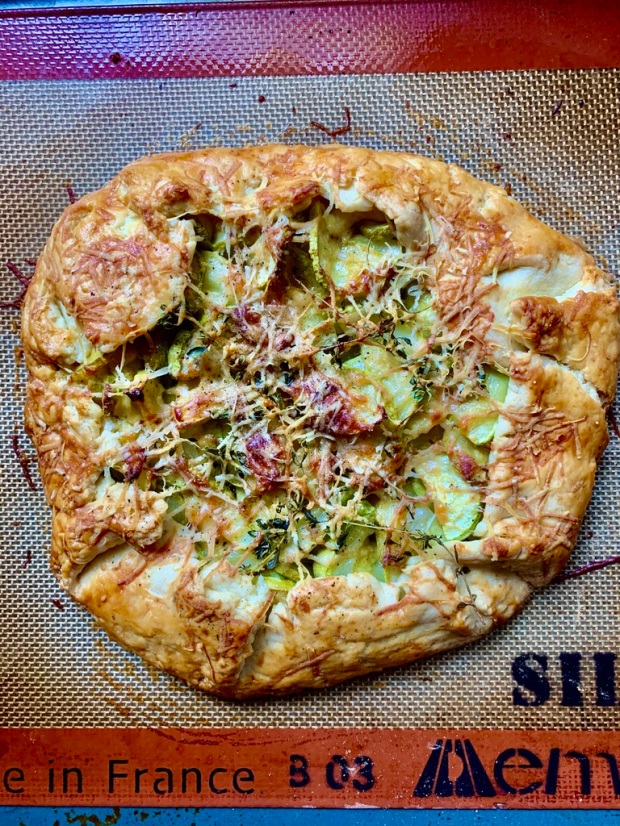 Combine the dry ingredient in a mixer, fitted with the paddle attachment, add the cold butter and mix on the lowest speed until the butter is fully incorporated and no large chunks remain. It should have the texture of course sand. Then slowly add the water till the dough just comes together. Stop the machine and pinch it. The dough should adhere easily when ready… you don’t want it too moist.

If you are making the dough by hand, use forks or a pastry cutter to combine the cold butter into the dry ingredients. Work quickly, to keep the butter from melting, if you need to put it back in the fridge to keep it cold, do so. If the butter melts, it won’t be flaky.

Divide the dough evenly in two, form two ball. Wrap each with plastic wrap, tightly, and flatten into a disk. Refrigerate for at least an hour or store in the freezer.

This site uses Akismet to reduce spam. Learn how your comment data is processed.